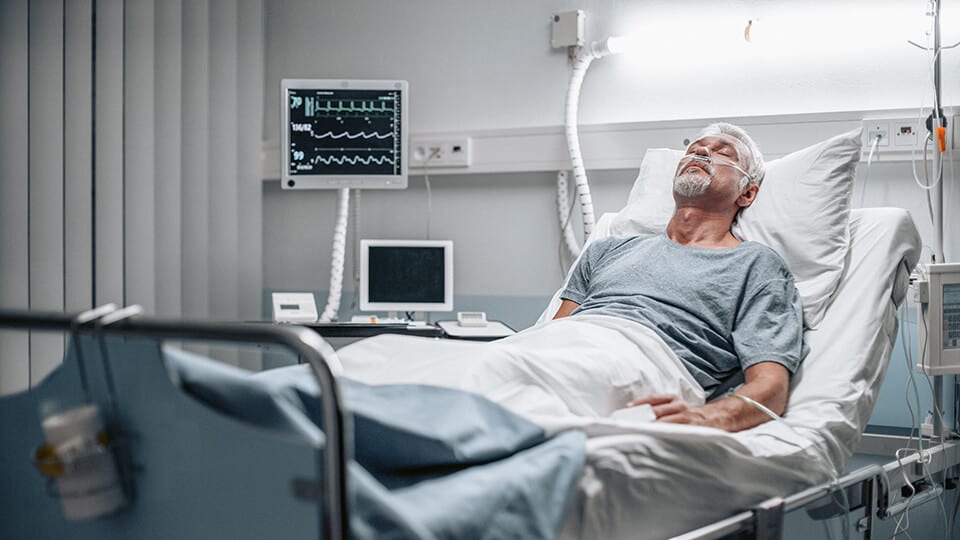 As fast as possible to the hospital!

In case of a suspected stroke (FAST-TEST) the affected person has to be brought to the hospital as quickly as possible. Immediate therapy of a stroke is essential. The faster a stroke is treated the smaller the number of brain cells lost which reduces the risk of consequential damage. The important rule is always: TIME IS BRAIN

Stroke Patients have to be brought as quickly as possible to the next stroke unit or emergency centre. Stroke units are special hospital departments which treat stroke patients quickly, fully focused and interdisciplinary. In Austria 39 stroke units guarantee optimal acute treatment of affected persons.

After arrival at the stroke unit/emergency centre the patient will have to undergo an immediate and targeted diagnosis. Stabilizing measures like a reduction and stabilization of blood pressure as well as neurological and clinical examinations are done as fast as possible as well. Especially modern imaging procedures like Computer tomography (CT), magnet resonance imaging (MRI), angiography and ultrasound methods (Doppler- and Color-Duplex-Sonography, echocardiography) represent indispensable basic diagnostic devices. These imaging options detect acute strokes and enable medical personnel to determine which kind of stroke the affected person has which is of high significance as this determines the following course of acute treatment methods.

In about 85% affected persons have an ischemic stroke which is the sudden blockage of a brain artery which causes an ischemia (lack of blood supply) which is associated with a loss of function in these brain areas this blood vessel supplies with oxygen. In about 15% affected persons suffer from a hemorrhagic stroke which is the rupture of a brain artery causing bleeding into the brain. Acute treatments differ significantly.

After the initial diagnosis of an ischemic stroke the first therapy may be thrombolysis, provided the patients has reached the hospital early enough (this therapy has to begin 4 ½ hours after onset of stroke). A medication is injected which dissolves the blood clot blocking the artery and the sooner this happens the better the chances are that the patient will not have suffer from severe impairments. The time window for this therapy is very narrow.

In the last couple of years a new additional therapy, thrombectomy, has shown to have crucial (critical) benefits for patients.

• a very severe stroke
• a blood clot longer than 8 mm

Mechanical thrombectomy uses a tiny mesh which is formed like a basket – a so-called stent-retriever – which “catches” the blood clot and removes it. Blood-flow can be re-established almost instantaneously after the procedure and the affected parts of brain can be supplied again with oxygen.

The treatment of a hemorrhagic stroke takes place in an emengency centre or a stroke units as well and needs to be done as quickly as possible as well.

Two essential treatments are in the immediate focus: The bleeding needs to be stopped as quickly as possible (unless resolved by itself) because if blood leaks from the ruptured blood vessel into the brain the surrounding tissue is displaced by the emerging blood clot. Due to the added pressure this blot clot causes healthy brain tissue can be damaged.

In the case of major bleeding, it may become necessary to siphon (by means of an operation). In order to reduce increased intracranial pressure a small catheter can be inserted into the ventricular system which drain the blood and creates space for brain tissue (drainage).

If the bleed originates from an aneurysm (a bulging vessel dilation) it has to closed by either being clipped (vascular-surgical procedure) or coiled (endovascular catheter treatment).

By clipping the aneurysm with a titanium clip the vessel is closed and separated from the normal blood circulation. A surgical intervention is necessary which means that the cranium has to be opened.

Coiling is a catheter treatment of the aneurysm. Tiny, platinum-coated metalspirals are advanced from the inguinal artery and placed in the aneurysm so that the hollow space is filled, blood cannot flow into it and the danger of a bleed is over.

If a brain bleeding is caused by high blood pressure it has to be reduced.

Medication after a stroke

Under ideal circumstances patients are treated with neuroprotective agents already in the acute phase after stroke. These substances reduce brain cell death and speed up healing processes in the early stage. An example with very good study results is Cerebrolysin® which is a intravenously administered neuropeptide preparation with neuroprotective and neurorestorative activity, consisting of low molecular neuropeptides and free amino acids. This medication improves the brain’s ability to protect cells and to regenerate them. It is recommended to start the administration as early as possible, ideally within a few hours after stroke. Improvements in arm functions and in activities of daily living were shown in several well conducted clinical trials. Also longterm consequences of stroke like dementia or depression can be minimized or even prevented. Please ask your treating physician about a treatment with Cerebrolysin®.

All usual pain-relieving medications (analgesics) can be used If pain occurs during the course of therapy. When selecting these medications pay close attention to potential side effects in connection with other co-morbidities (intolerances, other organ damage, kidney- and liver function).

Pain can also occur during the course of rehabilitation due to limited mobility (pain after longer periods of sitting or lying) or because of a developing spasticity. Individually developed pain therapy concepts may help in these cases, please speak to a medical professional about this problem.

After a stroke more than 25% of patients are functionally severely impaired and benefit from early rehabilitation as in- or as out-patients.